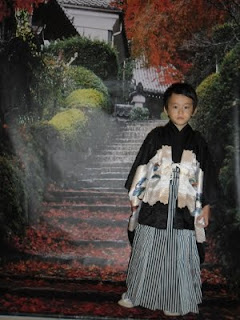 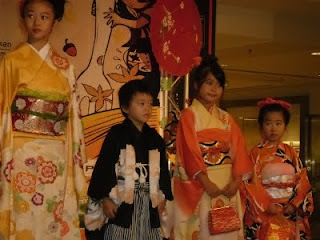 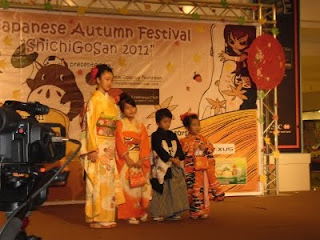 As we didn't go back to Japan this summer, Takara missed an opportunity to have his Shichi Go San photos taken. We decided to send him as a model to the Shichi Go San event at Gurney Plaza so that we could take some photos.

I had to promise to buy a DVD of his favourite series to make him say yes he will do it. But still till the last minute, he kept changing his mind. Other models, all of them were girls, also said they were nervous, but basically girls like to dress up and the girls were very confident once they were up on the stage....

Just before Takara's turn, I just disappeared, and he had no choice. Other 2 girls held his hands and went up to the stage. Initially he looked very tense, he was holding the head with both his hands, but gradually he got used to i.
Posted by Laksa at 08:27