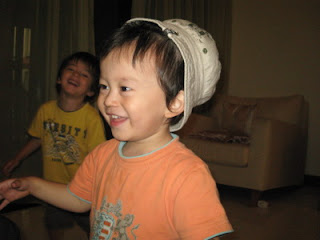 Takara has stopped taking breastmilk for a month. Since I was prescribed the cocktail of drugs, all sorts of medicines from hospital to prevent my headache, allergic reactions to house dust and stomach pain, I told him that my breast milk is not nice because my breasts are ill.

He resisted in the beginning but gradually he started to convince himself that mummy's milk is not nice. And one month later, he is 100 % free from breast milk!! I feel a bit sad as I was producing milk till then and Takara often said, "Oppai oishii (breast milk is tasty!)"

My breasts are still needed from time to time to give him comfort, especially before going to bed. He wants to touch them and kiss (it's a bit embarrassing though) them saying, "Oppai daijobu? (Are you all right, breasts?)"

"Oli oppai suki (I like breasts)" is his favourite phrase so I let him do them. I believe it will be better than forcing him not to touch my breasts. He can now sleep thorough, and in any case, much better for me.

The story I gave to the teacher...

Arata was born 2 days after Christmas in 2004 in London, England. He started to walk when he was 11 months and around that time, he flew to Japan, which was 11 hours flight, to visit his mummy's homeland. It was while he was in Japan when he first said 'Daddy'. Because he was only with his mummy, he missed daddy so much. He cried for "DaaaaDiieee, DaaaDiieee..."

His first birthday was in New Zealand, where his daddy is from. We took another long flight from England to New Zealand. By the time, he had become a good traveller.

Just after he came back from New Zealand, mummy went back to work, and Arata started to go to day nursery. Mummy dropped him off at 8 am, and daddy picked him up at 5.30, 3 days a week. He had all his meals and naps at nursery. He didn't like it much in the beginning and he cried every morning for over a month. Because he started nursery in the middle of winter, he caught all sorts of virus and bacteria but by the spring, he became immuned to lots of germs. Since then he's been strong and he is usually very healthy.

When Arata was 1 year and 9 months, his brother Oliver was born. As mummy was on her maternity leave again, he spent the next year with mummy and his little brother, except for Fridays when he went to nursery. And around this time, he started to talk a lot. He spoke mainly Japanese even to his daddy, who speaks Japanese too.

He had his 2nd birthday in England. Mummy baked a big Ampamman cake for him. Arata, Oliver and mummy went to Japan again after his 2nd birthday and spent there for 2 months. He made lots of Japanese friends this time.

After he came back from Japan, Arata reached the age he is a bit easier for mummy. He could sit in a cafe doing sticker books. As his brother was still a small baby and he was always asleep, Arata often went to a cafe after shopping with mummy to sit and do sticker books while mummy was having a cup of coffee.

Mummy went back to work again 3 months before Arata turned 3. He was back to 3 days a week nusrsery routine. He then had his 3rd birthday in Japan. By the time, he had also started to talk in English. He now speaks English to daddy and Japanese to mummy.

A big change came to his life in August this year. His daddy found a job in Penang and his family moved here in the end of September. Arata had to say good bye to nursery and all his friends in England. He misses them lots but he also looks forward to making lots of new friends in Penang. He started to come to Nania only a couple of weeks ago, but he's already found some good friends and he has lots of fun here.
Posted by Laksa at 05:23